Although we spent much of our time in Ecuador in Quito, we wanted to try and see something else. Fortunately, the town of Baños is about 4 hours away by bus, so we decided to leave at the crack of dawn one day and make the most of it.

Casa del Arbol: A trip to Baños isn’t complete without a trip to the big treehouse swing that goes out over the side of a mountain, resulting in some pretty awesome pictures. To get there, we had to catch a local bus from town (ask around about the buses that pass by Casa del Arbol) and endure the one hourish bumpy ride up the mountain. At the top, there are actually two giant swings (columpios gigantes). The one to the right is the best. We got off the bus quickly and jetted our way to the entrance, which I’m glad we did because the line gets pretty long for the swing! There is a man that will push you on one of the best swings and you go back and forth maybe 15-20 times, so have a friend ready with the phone camera and take as many pictures as you can because it’s hard to get one just right! I have to admit, I was pretty terrified since it’s just a rickety wooden swing with a little strap hooked in front of you. I may have screamed a bit, but I wasn’t the only one. 🙂 There’s also several other swings where you can push each other, though it’s hard to get going as high as the man who works there! There’s even a short zipline over the ground and a long snakelike balance beam you can walk, which also gives pretty badass photos. Afterward, while waiting for the bus, go down to the restaurant and get a hot cup of canelazo! This is like hot apple cider, but they add a special liquor to it which gives it a nice kick and this particular place used some liquor that changed the color of the liquid. Pretty neat. 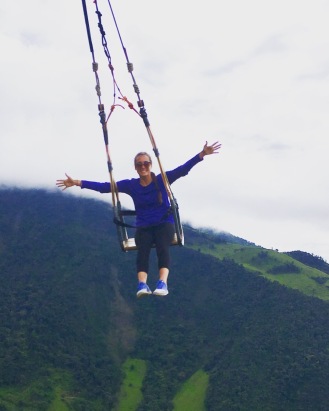 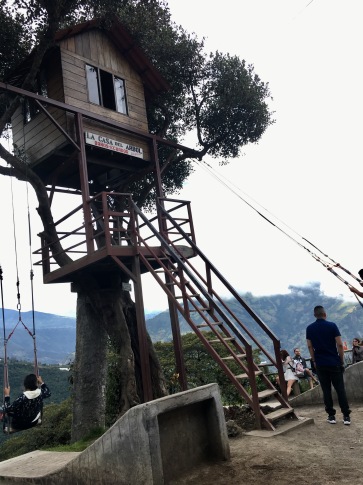 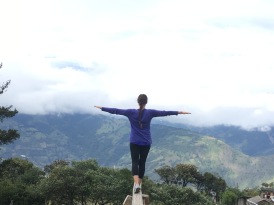 Pailón del Diablo (Devil’s Cauldron): This waterfall is super powerful and was well worth it! You can bike maybe an hour outside of town to get there, but we were short on time so we hopped on a public bus which took about 15 minutes and was cheap. You can get dropped off above or below the waterfall. Apparently if you walk from above, it’s a bit easier, but you don’t get as close to the waterfall. We decided to enter from below, which had a nice easy hike and then you came out near the middle of the waterfall. If you’re willing to get wet, you can crawl through some tiny spaces in the rock wall and then run up some stairs cut out right next to the waterfall. We did this and got completely soaked, but it was fun. 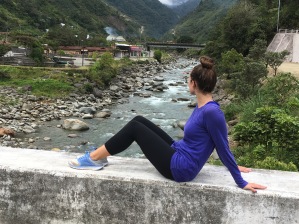 Thermal Baths: Baños is named for all the natural thermal baths they have. There are several, but we visited the ones in town situated right next to the mountain called Termos de La Virgen. We went in the evening before returning on the bus and it was nice because the sun wasn’t blaring down on us. Lots of locals go at night too, so you can see a bit of real life and make friends. After paying the entrance fee, there are baskets to put your stuff in and leave with a drop off counter. Then there are several different baths to choose from. The most popular is a warm bath upstairs, but there’s also a chilly one up there too (these might be better if you go in the daytime). Downstairs, there’s a scalding hot one which I read is about 130 degrees Fahrenheit, next to a freezing cold one that is almost as cold as ice. This is where the hardcore locals hang out as they’ve learned to handle these temps. I sat there on the edge of the hot one for awhile, dipping my toes in, then my foot, and suddenly pulling it out as I exclaimed in pain and my skin broke out in goosebumps from the heat. Some locals sitting near me kept telling me just to get all the way in and not to move as much because it hurts worse. Honestly my skin is tingling just remembering how hot it was! But eventually I made my way all the way in up to my shoulders and lasted about 30 seconds (maybe?). Then I tried doing the ice cold one…same problem, but eventually succeeded! I know there’s a lot of research that says this sort of thing is good for your muscles and joints, but I’m not sure how often I could handle it. Anyways, great place to visit…can’t miss it!

Mercado: Definitely stop by the market and grab a big, cheap lunch for a few dollars. We enjoyed a delicious meal sitting at a plastic table in the middle of the market with an Ecuadorian family whose little girl couldn’t stop staring at us as we spoke in English. 🙂

Aromi Cafe & Chocolate: This little cafe is perfect for a delicious breakfast or hot chocolate. Apparently you also can choose one of their different chocolate bars and they’ll make it into a hot chocolate for you!

Baños was a great little day trip, though if I were to do it again, I’d want to stay for a couple days as there’s much more to see and do there!