Finisterre (or ‘Fisterre’)…”el fin del mundo” or “the end of the world”….in the past, people genuinely thought this was the end of the world, just as they thought the world was flat and you could sail off the end. Apparently there are other ‘finisterre’ points, too. One in Portugal, though the name has now changed, and another in northern France somewhere. Essentially, it’s a cliff that sticks out into the sea and appears to be the end for as far as you can see. Now, it’s also become a popular tourist point and extra trip for pilgrims on the “Camino de Santiago” or “Saint James’s Way”, which traditionally ends at the beautiful, huge cathedral in Santiago de Compostela. Many of them continue out to Finisterre at the end of their trip though and burn something….hiking boots, hats, jackets, etc. I thought this tradition sounded neat until I saw how much this “stuff” trashed the otherwise beautiful piece of land. It completely ruins it. (Side note: I was fascinated in Ireland by the lack of trash EVERYwhere….people genuinely appreciated the land and treated it well. Then being in Spain and the states, I notice how much we litter. It’s disgusting.)

A cross at Finisterre…you can see the clothes and burn spots nearby.

I made this trip with one of my teachers, Ana, her husband, José, and three-year-old son, Ramón. He is the most precious thing with the longest eyelashes ever. We had great fun and I even learned a Spanish (or rather, traditionally Galician) children’s song, with motions and all. I’ve been practicing so I can bring it back with me! haha. Upon arrival, it was 2:30pm and lunchtime for the Spaniards, so we hit a famous seafood restaurant that turned out to be very expensive but fantastic. The three of us shared the “gastronómico” meal generally for two people and it was plenty, along with fresh bread and a bottle of white Ribeiro wine. The first course was “percebes”….gooseneck barnacles. Here’s a picture after I’d already torn a few apart and eaten the meat out of the middle:

They grow on rocks and José was explaining the process of ‘fishing’ them to me. It is extremely dangerous as they only grow on exposed rocks that have the sea splashing against them. One person goes in a boat and another person hops onto the rocks with a rope tied around his waist, connected to the boat. When the waves go out, the boat goes out. The workers have to know the sea like the back of their hand and anticipate its rhythm, or they could die. There are videos on youtube showing the process if you’d like to see…it’s really neat and made me appreciate these little things I was eating even more! (search “percebeiros” meaning barnacle hunters and “Galicia”). Anyways, to eat these, you have to grip the leathery-covered piece in one hand and the rock-hard piece in the other, twist and snap at the same time while being careful you don’t get squirted with the juice. It’s really difficult! Several times I had to use my teeth to tear a hole in the leathery part first. Once you get that skin off, there’s a little tube of meat that you bite off and discard the two sides. It has a very “seafood” taste, but I really liked them! And they’re a delicacy seafood, so I felt honored to have the chance. J The remaining courses were: navajas (‘razor clams’….tried them my first week and hated them because they reminded me of huge white worms, but by now, my tastes have adjusted and I enjoyed them), almejas (clams with some sauce on them that was delicious), and lubina (a large sea bass fish, brought out with the head and tail, though they did chop it into sections for us). The restaurant set-up was neat as well, because when you walk back into the dining area, you pass through the kitchen. I still find it so neat to see a huge grill with over 10 different types of fish completely whole cooking on them! It makes me smile. For dessert, we split fresh strawberries dipped in white and dark chocolate, decorated to look like a tux, and strips of pineapple rolled and filled with fresh cream mixed with chopped nuts and drizzled with some fruit sauce. Delectable. For the finale……a coffee, as always.

We explored several other areas that Saturday as well…stopping at the top of a mountain with beautiful views of La Carnota, the longest beach in Galicia, and a gorgeous waterfall caused by a manmade dam, called Embalse. You can go right down onto the rocks near the waterfall and there were a brother and sister all dressed up after their First Communion getting the endless family photos taken. I may or may not have snapped a few creepy shots on my own….

From the top of a mountain near Muros and La Carnota

That evening, we stopped in Muros, an ancient Roman village and seaport with many of the original tiny streets still intact. We had dinner of ‘zorza’ (a delicious pork dish cooked in paprika and other things), ‘tortilla de patata’ (typical, especially when you have a 3-year-old’s taste buds with you!), and ‘calamares’ (squid…yummmmmmmmmyyyyyyyy). Before heading in the car to go home, we wandered some of the streets, ran into a student and teacher from Pobra, and explored the port where I saw piles and piles of the traps they use to catch the smaller octopus and crabs and one of their huge ‘Coast Guard’ boats.  A great day.

Windmills on the top of every mountain in Galicia, it seems. But I love this photo!!!

However, on Sunday, Ana and José had even more adventures planned! After breakfast, we started out the day with a long walk in a nature preserve area called Catoira….it travels along the salt marsh caused by the mixing of the salt water bay and fresh water river. I learned plenty about plants and trees this weekend, too, since José is a research biologist and Ana is a biology/geology teacher. They know many of the words in English, too, so I was quite impressed (and ashamed of my lack of knowledge about the trees we have in America, while they could explain it all).

We made a fantastic lunch at home….José taught me two ways to cook fish since I’ve never done it before. Instead of getting fresh, whole fish as would be typical for them, he got some frozen pieces of ‘merluza’ (hake) so I could learn what to do once I’m back home in the states and don’t have access to all their fresh seafood. We also cooked up some zucchini, mushrooms, and asparagus, then made a salad with lettuce, green tomatoes, fresh cubes of goat cheese, and nectarine! I was surprised to add the fruit since my salads are typically overflowing with only vegetables, but it was fantastic. And the Spaniards don’t use dressing like Americans are used to…only extra virgin olive oil, red wine vinegar, and salt. Afterward, we enjoyed a coffee and treats while relaxing in their living room listening to Galician music (quite similar to Celtic/Irish, with their own versions of bagpipes).

In the evening, we visited one of my favorite places yet: Pazo de Oca. (‘pazo’ is ‘palacio’ in Galego….’palace’ in English; ‘oca’ = goose). This is an old medieval palace now owned by some family. You can’t enter the palace itself, but the main attraction is the huge expanse of gardens. Things are a bit overgrown, but the wild nature gave it a beauty I can’t express. You walk through weaving little pathways surrounded by bushes, trees, and flowers, plus a vine with budding grapes over your head. There are areas that are rented out now to companies for growing plants, so there is fresh growth, too. There is even a labyrinth! Plus, it wouldn’t be complete without the ‘ocas’….there is a medieval dam system set up under the ground for watering the plants, creating little oases of water and the sound of running water in nearly all areas. There is also an ancient hut where the women used to do the laundry, using the water system. I absolutely enjoyed every second walking around, having a snack while sitting on moss-covered ancient stone benches, learning about all the trees/plants/flowers, and taking picture after picture. Throughout the 2.5 hours we were there, I also was thinking one thing…..I found the place where I want to have my wedding! It’s exactly how I imagine. Too bad it’s in Spain! haha 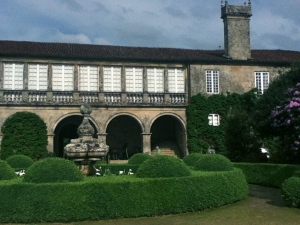 The entrance to the gardens

One of my favorite photos of the weekend, even though it’s only flowers, a stone wall, and old door. 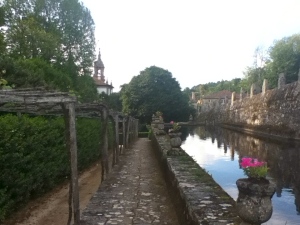 I just love all of this. 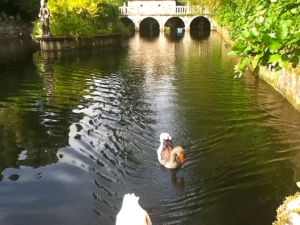 Can’t have “The Palace of the Goose” without some geese!

Happiness…just imagine at the end of summer when all those vines are filled with bursting grapes! I wish I could see it!

So that’s my weekend….it was back to reality this week, but in actuality, I got sick instead. Had to miss school on Wednesday when the weather was absolutely beautiful. Today is a ‘día de festivo’, meaning we don’t have school, but the weather is cloudy and cold so I can’t hit the beach. 😦 And next week it’s supposed to rain again. Frustrating! Oh well. Only a couple more weeks, then I’ll be packing up my room and heading to Austria to meet my mom and grandmother. I’m getting excited!!!!